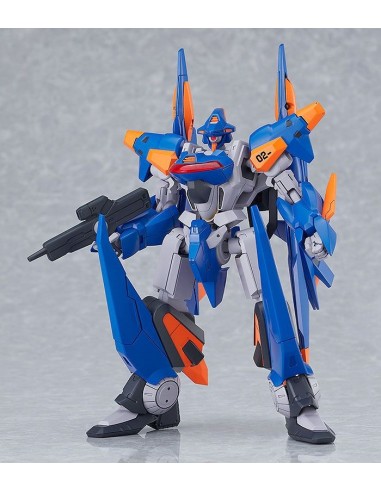 Gaiking is a mobile robot base that appeared in the TV animation "Gaiking" broadcast in 1976. "Gaiking" is the first original robot anime produced by Toei Animation (currently Toei Animation), and has been differentiated from existing works in various aspects. There are nine main characters on the main character side, a wide range of entertainment elements such as baseball, psychic powers, black holes, ancient ruins, and UMA, and the existence of the Great Sky Demon Dragon. Until then, robot animation had a scheme called "the leading robot and the base that stores it." However, while Gaiking was a base, it was a much larger robot than Gaiking. 1976 was an unprecedented robot anime boom in which eight robot animes were broadcast at the same time, and this work was born at the timing when competing works lined up. There, the characters of "Magic" in the name, the head imitating the skull of a dinosaur, the sharp fangs and claws, and other elements that might be mistaken for a villain, have been seen by everyone until now. He gave him the "crush" of a strong and strong robot. The video of Gaiking and Gaiking, robots of very different sizes and styles fighting together, had a great impact, and this work left a deep mark in the world of robot animation. Another important point was that the appearance of the Great Sky Demon Dragon developed the product development by Poppy (currently Bandai). The "Super Large DELUXE Jumbo Machine Dar Gaiking" includes the play of putting the Skyler, Nesser, and Bazoler of "Popinica" in their pockets and starting them. In other words, the two major brands of the time, Jumbo Machine Dar and Popinica, were tied to the core of Gaiking. Of course, this GX100 Gaiking & Gaiking also makes use of the big scale of Gaiking with a total length of about 750 mm, and it is possible to install and store not only 3 micro popinica specification dinosaur mechas but also Gaiking parts 1 and 2. ing. Stand by for the release Soul of Chogokin, which has been refined to specifications that allow you to fully enjoy the charm of Gaiking! Completely new modeling Gaiking can be separated and combined into parts 1, 2 and 3. Equipped with gimmicks throughout the body, such as the "killer bite" that opens the chin on the abdomen, the "back shredder" that is installed in the center of the wing on the back, and the "counter cloth" on the knees. Reproduce the unique style that can be said to be a variant among many super robots. Includes 3 micro popinica dinosaur mechas that use die-cast body. Each aircraft has a movable neck and wings. Can be fixed with a magnet when stored in Gaiking. Includes optional parts that can reproduce the program initial settings with two main landing gear claws and no spikes on the elbow wheels. Multi-layered storage system. It is a play value unique to big scale.